The A D Long Trophy for New Zealand’s Champion Squash Masters Club Team, is in new hands, after a strong North Shore team fended off Papakura in Sundays final match.
The competition, held in a different province each year, and new to most Northland Squash players, ran over Friday, Saturday and Sunday at the Kamo Squash Club with sixteen teams competing.
The crowd were treated to some great squash, featuring a number of New Zealand’s top ten masters players.
In the Championship final, drawn to play first, Papakura’s number four Cedric Charlton put first points on the board, with a three set victory over Gavin Baker.  From then on the North Shore players reigned supreme however, with Gary Duberly, Paul Tuffin and Mark Waldin overcoming Len Brennan, Wayne Reid and Blair
Cornwall. 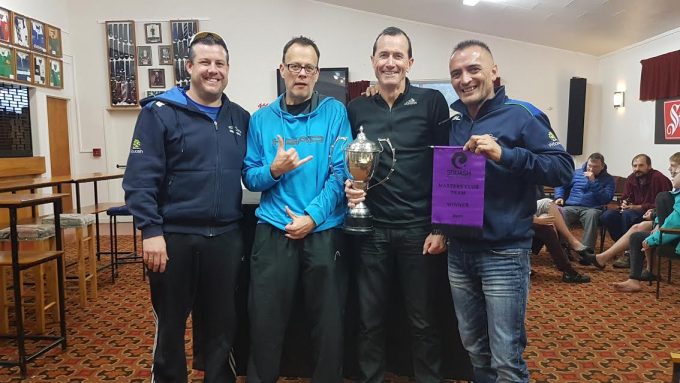 The Silverdale team brought the trophy north after victory in 2016 in Timaru, but in this weekend’s playoff for third and fourth, host club Kamo (Bruce Smith, Kelvin Moselen, Gary Traill and Shane McInerney) came off best.
Neighbouring local clubs Mid Western and Mangakahia, unlucky not to make the top division, reached the Championship final of division two.  Kevin Small got his Mid Western team off to a good start, but not without being severely pushed. The match featured two extended games – one decided at 20-18 to opponent Linda Matson, and the fourth and final game reaching 18-16.  The following three matches however went Mangakahia’s way.
The division two playoff for third and fourth place took the longest time to decide, with Whangarei 3’s Robyn Hamman and Manurewa 2’s Megan Poa proving to be very well matched.  Scores see-sawed throughout with Poa earning her teams first points with an 18-16, 18-20, 12-15, 15-6, 15-11 victory.  Edgar Poa set his Manurewa team up nicely, when he defeated Delwyn Houlihan in four games, and when number one player Boyd Wright (Manurewa) scored 15-9, 15-6, and held match ball 14 to 7 in the third game, it seemed the tie was over.  However Bryce Phillips (Whangarei) was determined that his weekend would not end with a loss, and fought back to win that game 17-15, and then claw his way to victory in the next two games.  Whangarei’s Tracey Klaricich required a win to force a two all draw and countback, but Allen Nicholson had other plans and after a tough four setter, clinched the third position for Manurewa 2.
The weekend also featured a meal and social event on Saturday night, and a spot prize draw.
Special prizes went to Papakura club mates Penny Iriaka, Stacey Kendall, Terina Delaney and Len Brennan for their dress up efforts.
Spot prize of a Head Squash racquet donated by McCoy and Thomas Sports went to Wayne Brown.
Other spot prizes were won by Craig Gurr, Len Brennan, Stacey Kendall, Bryce Phillips, Dave Cameron, Kelvin Moselen, Paul Tuffin and Gavin Packer.
The Kamo Squash Club is grateful to Pacific Motor Group, Boundary Hunter Surveyors and McCoy and Thomas Sports for their sponsorship of this event.
The next event for Masters players in Northland is the Northland Masters at Mid Western Squash Club from August 11 to 13.