Sacha Pou-Tito took out the Angus Sport Senior Player Series win in the final tournament of the 2016 Angus Player Series, the Kaipara Open

Shayden Toka came in 2nd place winning $500 in cash.  3rd place was Anna Moselen, she also won a special prize as the only player who played in all 10 of the Angus Sport Series tournaments, a great effort!

Angus McDonald from Angus Sport has sponsored this senior player series for 3 years and this is his last year of sponsorship.  We greatly appreciate Angus’s generous sponsorship over these 3 years, this series has had a positive effect on tournament entries and has been a great boost for squash in Northland.

Looking forward, we are in the process of looking for another sponsor for a 2017 Player Series and beyond. If you know anyone who may be interested in sponsoring this series – any amount of sponsorship is appreciated, either cash or goods – please contact Squash Northland. 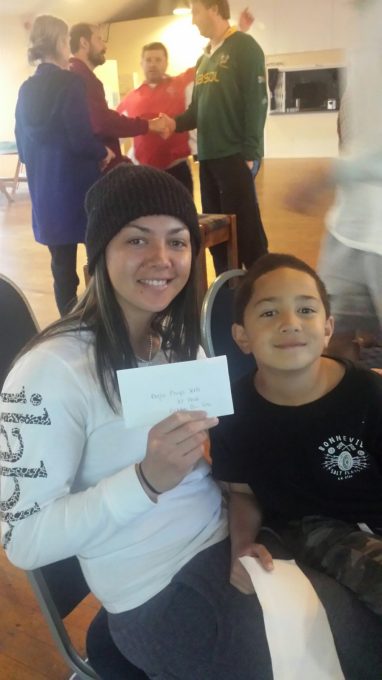 Sacha and her son Jaydon with her Angus Sport winnings