Sacha Pou-Tito and Finn Trimble took out the Northland Open titles at the weekend.

The 2016 Northland Open Men’s title was won by Whangarei’s Finn Trimble who played top seed Brent Lewis in the final, winning in 4 sets, with the experienced Lewis taking out the first set but Trimble fighting back to win the next three.  3rd place in the Men’s Open went to Tyler Ranger, with a comfortable win over Panmure’s Richard van Rynbach.

The 2016 Northland Open Women’s title was also won by the 2nd seed, Northland’s Sacha Pou-Tito, taking the match in a close 4 sets against the top seeded Abbie Palmer in the final.   The 3rd and 4th place in the Women’s Open Division was played out between Sian Duggan and Kamo’s MacKenzie Johnson, and MacKenzie took 3rd placing with a 4 set win. 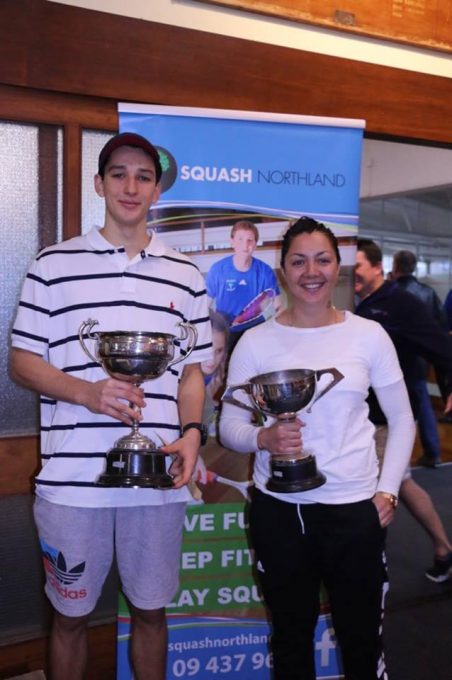 Other winners in the divisions below included Whangarei’s Shayden Toka and the talented 11 year old Natalie Sayes from Remuera took out the Division 1 titles, both finals were tough 5 set battles.

Another talented 11 year old – Mason Smales from Henderson was the Division 2 mens winner, and Whangarei’s Sharon McDonald was the ladies Div 2 winner.

Division 4 was also won by juniors – Cory Ferguson from Mid-Western won the mens with Kamo’s Ruby Collins taking out the ladies.

The Ladies Division 5 winner was Kamo junior Hannah Thomas and the mens was Mangakahia’s Wayne Brown who both faced close 5 setters in their finals.