The tournament, noted for the lighthearted mood created by players dressing up to play their doubles matches, was so well supported that matches overflowed to the Whangarei Squash Club courts as well. 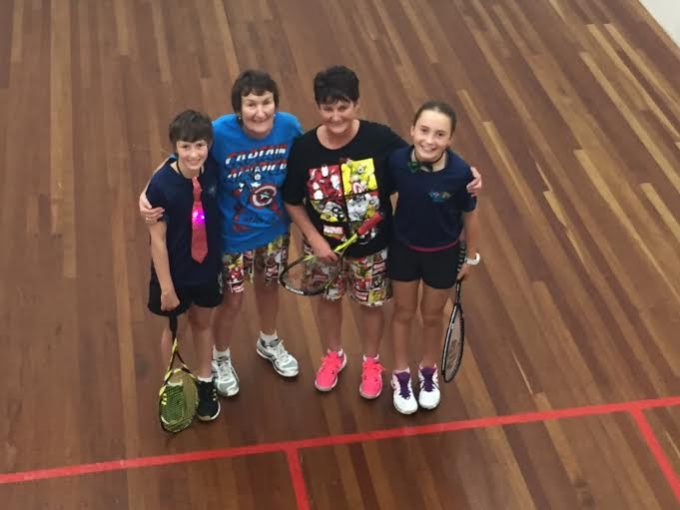 A number of visitors from other provinces, including travellers from the Wanganui, Eltham, Manurewa, Panmure, Mt Maunganui and Lugton Park (Waikato) clubs, added interest to both the singles and doubles draws, as players turned out in record numbers to the Kamo Rugby and Squash Club for the latest of Squash Northland’s tournaments.

The Ivan Pohe Memorial Doubles final provided a fabulous exhibition of top level squash as Max Trimble (a Whangarei local now playing at Lugton Park) teamed up with Milton Brookland to defend their 2015 title.  The title, a bit of a family affair, was no foregone conclusion however, with A1 graded Luke Jones (from Palmerston North but resident in Whangarei) and Brookland’s sister Olivia, making them scrap for every point in the match, which went to a deciding third set.

In Sundays Mens Open singles final, top seed Trimble met top Kamo player Bruce Smith, and while Smith showed his usual consistent hard hitting and retrieval skill, the polish and fitness of Trimble was too much on this occasion.

Travellers Nathan Wall, Murray Care, Mike Hebditch and Carl Matthews made their long trip to Kamo worthwhile, with a handful of five set matches throughout the weekend.

In the Ladies Open final Mackenzie Johnson put up a commendable fight against A graded Sacha Pou Tito, with the final score of 15/8. 16/14, 15/12 indicating that she will be a real threat before too long.  Five set finals in both the special plate, and plate matches, also made for some great watching, with Northland team mate Iyra Stewart overcoming Annmarie Holst 17/15 9/15 15/13 9/15 15/9 to take third place.  Kaitaia’s Cindy Hassan also took five sets to take the victory from Kate Wachop in the plate.

The longest finals tussle, although only a four set match, came in the Ladies Division One final.  After a tough Friday night start when she scraped through against Sharon McDonald 13/15 17/15 13/15 15/6 15/5, second seed Julie Geange, from Dargaville,  had to work hard for Saturdays 3 set win over Catherine Powdrell before treating the crowd to an epic  16/14 15/12 13/15 20/18 win over Tracey Klaricich.

Experience overcame youth, when third seed Neil Lewis from Mangakahia toppled Manaia’s Riley-Jack Vette Blomquist in Mens Division One.  In this division the most court time was taken by ex Kamo player, Greg Prinsloo – now in Central Districts territory.  Prinsloo came the closest to toppling Lewis from his prizewinning charge, before taking five sets to lose both his following matches.  Tournament co-ordinator Gary Traill added to a marathon week of organisation with a couple of five set battles, including the removal of top seeded Kevin Austin on his way to winning the special plate.

It took Manaia’s Freddie Jameson two five set wins to get to the Division three mens final, but after Brad Moselen took the first game of that match, Jameson was able to keep his nose in front and take the win.

The mens Fourth Division was won by second seed Flynn Venmore, with the match of that draw perhaps an earlier pool game when the ever improving Paddy Ferguson beat William Steenkamp 6/15 15/10 15/11 14/16 15/9.

Some mixed Junior Divisions rounded off the draws.  In the First Mixed Division Ethan Hare and Olivia Rhodes won through to their final with two four set matches each, before Ethan powered his way through to a three set win in their final match.

Ladies Not So Serious